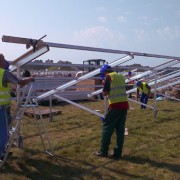 The falling costs of panels continue to be a driving factor in the growth of solar electricity.  The average cost of a completed PV system is 16% less than the previous year. It now stands at $3.00/W.

Texas’ cost of all PV systems is $5.83/W, which is 9th lowest in the country. In comparison, Ohio is the most expensive state in America, with an average cost of $10.09/W. In California, the nation’s leader in terms of capacity and total number of installs, the average cost is $7.08/W.

Because of the enormous growth in manufacturing capacity in Asia, the average price of a solar panel has declined 60% since the beginning of 2011. These lower prices combined with a favorable regulatory environment and increased demand will likely mean more record growth in years to come. By the end of 2013, 4,300 MW of PV were forecasted to come online, a 27% growth over 2012.

Want to join the discussion?
Feel free to contribute!

Solar Power – Free Energy from the Sun
Scroll to top